via the Language Log (2004), all links to articles broken by now

I don’t want to be evil.

So the semester’s wickest wildest party, bar none, is happening at the straight-up palatial house of Hamza Hydri, AKA V3rsetyle, whose way-too-trusting parents are currently scuba-diving in Venice. And I’m not only going to be there, I’m going to Be There, as in, running shit, because I just dropped all my savings pirating the baddest Socialight personality module on the market: the freshly-leaked Maestro 2.0.

This thing is like, borderline AI, the kind of mod billionaires and celebrities are going to be running. I never would have found it by myself, but my uncle is a huge data-criminal sparkhead who caught the leak and agreed to ship me a stick copy in exchange for every last bit of my blood-sweat-and-shears summer landscaping income, and also me not telling my mom.

“The past 100 years have shown that the engineering disciplines, compared to all other fields of science, have probably by far the highest impact on society. The last is especially true with the emergence of the information age, which gives us one of the most influential instruments for psychological control humanity has ever had. With all that said, engineering science plays an important role in the development of our society, and to a large extent the future of mankind now lies in the hands of engineers.”

Some people have got a mental horizon of radius zero and call it their point of view.

“Hey, isn’t that a coincidence? I hated physics!”

“I was so terrible at it in school, and my teachers were simply awful. But you must be a genius!”

That exact conversation is more common than you might think. I’m sure that lawyers get evil-lawyer jokes and accountants get some variant of, “Gee, that’s boring,” but physicists are told that their passion is dreadful in a way that’s supposed to be a compliment. It would be easy to slip into the conceit that what we’re doing is so esoteric and so painfully difficult that we are modern-day wizards, but that would be a lie.

Physics isn’t about out-of-this-world things like flux capacitors and trips across the eighth dimension: it’s as in-this-world as you can get. It’s a fascination with all the little things that our world does, such as ice crystals growing on a spider web on a signpost. (...)

From “Coffeshop Physics” by Jim Pivarski. Make sure to check out other of his brilliant posts, like “Leprechauns and laser beams” or the Physics in a Nutshell section. 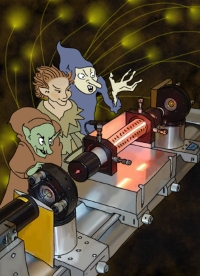 In the year 1930, John Maynard Keynes predicted that, by century's end, technology would have advanced sufficiently that countries like Great Britain or the United States would have achieved a 15-hour work week. There's every reason to believe he was right. In technological terms, we are quite capable of this. And yet it didn't happen. Instead, technology has been marshaled, if anything, to figure out ways to make us all work more. In order to achieve this, jobs have had to be created that are, effectively, pointless. Huge swathes of people, in Europe and North America in particular, spend their entire working lives performing tasks they secretly believe do not really need to be performed. The moral and spiritual damage that comes from this situation is profound. It is a scar across our collective soul. Yet virtually no one talks about it.

Cause I’ve got the brains, they’re there in my head
All that remains is just to get out of bed
I’m missing the best part of the day
Stealing tomorrow to help me get over today